In this article sub frame, subframe and ("front axel carrier" term used by Mercedes in recall), are all the same part

It is VERY important to check the status of the attachments on your SL. Many cars haven't been recalled, and Mercedes interpreted the scope of the government-mandated recall in a narrow way: 350/450SL/SLC are covered, but 380SL/SLC and others using the same part subject to the same failure are NOT covered, therefore no one seems to be checking them. Check yours! It could save your life.

If the subframe fails you will drop the lower control arm onto the ground. Simply put (out of control!)

This was an important recall campaign as it fixes the problem of cracking steel sub-frames that can create a safety/hazard issue.

Note: You should understand that the sub-frame is subject to "sudden catastrophic failure" and should not be ignored.

What is the sub frame problem? The sub-frame underneath the front end of the car can and may develop a crack that could cause the car to malfunction and cause injury.

How is it repaired? If the sub-frame has developed a crack the entire sub-frame will be replaced by Mercedes. If it has not cracked yet then a support will be welded in place to prevent the crack from occurring.

How to determine if your SL has had the repair done: Take your car to the nearest Mercedes Benz dealer and have them check the MBnet using your vehicles' VIN number. Ask about SIL 33/001 Sub-frame Modification dated 11/1/85.

How much does it cost? The entire repair is covered fully under the recall. The only item not covered is the rubber sub-frame mount kit at $280

The repair kit is to reinforce the subframe of a SL or other 107 to prevent it from cracking from the stresses that rust, pot holes, curbs, and other things impose on it.

The SL's are subject to a failure of the front lower control arm rear attachment to the subframe. This will result in loss of steering control and likely, a crash. The 450SL was recalled but Mercedes has never recalled other SL's and SLC's, that have the same defective subframe design.

The subframe problem never went away, Mercedes just decided to ignore it when they put the lighter aluminum V8 in the car!  I had to replace the subframe in my '82 380SL because one of the lower control arm mounting tabs broke off! I have the new subframe in my '79 450SL, and it is MUCH stronger than the one in the '82, which is now the original subframe style with the reinforcing tabs. All the reinforcing tabs do is add some metal to each side of the lower control arm tabs.

As the subframes in these classic cars continue to age, they will become more and more prone to the stresses that pot holes, rust, curbs and other things impose on them. So, these kits provide very inexpensive insurance against the potentially costly and catastrophic failure the above person experienced and others could very well experience in the future.

Kits include 4 gussets that Mercedes sells for $98-$106, and installation instructions explaining how to weld them into place.

If you can’t weld, you can have a muffler shop, body shop or other shop that does welding install the gussets for you, typically in an hour or two. 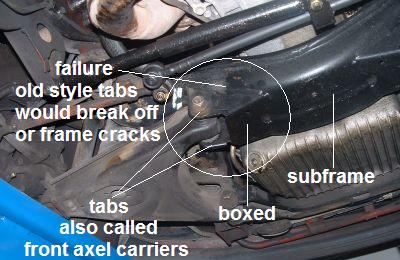 Speaking as a long-time SL owner, I believe the benefits of doing so could greatly outweigh the costs, aggravation and even injury that could result if the subframe cracks or breaks.

This is the newer boxed unit. (The original lower control arm attachment points on the rear of the subframe didn't have the boxed area at all). They only had the tabs projecting down, and no side reinforcements at all, so if the car was curbed the tabs would break off. It would be pretty easy to box the front tabs also, and would probably be a good idea for your project. The whole front subframe began with the 114 cars, in fact my '82 has a 114 subframe under it right now. I had thought I remembered the boxing of the rear lower control arm tabs on the '79 going right under the arms, but after looking under my two cars just now, I can see that it is like the photos. Not as strong as I remembered, but a huge step up from the old setup, which as someone said, they continued with through the '85 model year.