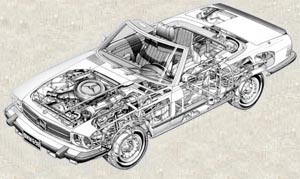 They called it der Panzerwagen. The "armored car", as it translated from the Teutonic tongue, wouldn't seem to be a very dignified name for an automobile that's become one of the most coveted status symbols of our times. But those in Mercedes-Benz engineering who coined the moniker for the new 350SL had a point. Compared with the lovely, svelte 280SL that it was to replace, the 350SL did indeed look brutishly impregnable.

Of course, given the regulatory climate at the dawn of the Seventies, that was the point, Mercedes engineers knew the new design would have to meet not only the desires of consumers, but also the safety (and emissions) standards of U.S. lawmakers.

The 350SL ended up heavier and less efficient that the 280SL of the Sixties, far less sporting than the legendary 300SL of the fifties, and almost homely next to the two previous beauties. Yet the design worked-- so gloriously, in fact, that it persisted almost unchanged for nearly two decades, selling about a quarter of a million copies along the way.

But now, for us less moneyed enthusiast, there's been a happy confluence of events that has made owning an SL affordable. Thanks to the introduction of the current 300/500SL, the nation's sluggish economy and the vast numbers of these SLs on the market, you can put a fine example in your garage for a little as $12,000. Intrigued

Then read on. SL foibles

In affluent Newport Beach California, home of R&T, residents drive "Newport-Beach-Chevys" elsewhere know as Mercedes-Benzes. And in the area around our offices, there seems to be a Mercedes mechanic on every block.

Steve Marx, owner of Marx Mercedes Service, and Rod Curha, owner of Dan's Automotive Service, are two of the most knowledgeable. We culled their wisdom regarding the purchase of an older SL. And we also turned to a nearby Costa Mesa resident for advise, Doug Rugg, proprietor of an independent used Mercedes dealership, DR imports.

The well-heeled usually choose their status symbols for compelling reasons, and these SLs process a host of them. They were built with superb care. They show sophisticated engineering. They're sublimely comfortable. And because of their bulk and stout structures, they're just about the safest open cars imaginable. But beyond these attributes, most of these 1972-1989 V-8-powered SLs have engines that are just about unburstable.

And from Marx, "I have some customers with at least 300,000 miles on their cars and the engines haven't even needed valve jobs."

So does this mean a high-mileage early SL, say, one with 150,000 or even 200,000 miles, might still be a good buy? You bet. "I wouldn't be afraid of it, as long as I knew its service history and it was a good car in other respects," said Cunha. (All of our experts recommend oil changes be done every 3000 miles.)

Still, all things being equal, it's best to avoid 1975-1976 models, and 1974 California cars as well. In the former, the cars carried catalytic converters inside the engine compartment. The heat generated by the converters tends to cook wiring and vacuum lines under the hood. Vapor lock was also a common malady. Mercedes engineers moved the catalysts farther downstream for 1977.

The 1974 California cars, according to Marx, were equipped with exhaust-gas-recirculation devices that cause stumbling problems.

For model year 1981, Mercedes substituted a lighter, more efficient all-alloy 3.8 liter V-8 for the old reliable iron-block 4.5-liter V-8. And along with it came trouble.

The engine has a single-row timing chain, which as the miles piles on, tend to stretch. Unchecked, the chain can jump its sprockets, causing pistons to collide with valves, leaving the 380SL owner facing a $6,000 repair bill. During 1984, Mercedes switched to a double-row chain and solved the problem.

Though it was not an announced recall, Rugg says that at one time Mercedes did convert some of the early 380SLs, free of charge, to double row chain for some customers. "The only way to know if a car is converted is to take off the valve cover and look."

Owners of 380Sls -- and later 560SLs, another SL with an all-alloy V-8 -- may also find that if their cylinders heads need to come off for any reason, they'll face an extra expense of several hundred dollars, in addition to a valve job or work needs to be done. Mercedes suggests that once the head bolts are removed, the aluminum block must be helicoiled to provide new threads. Otherwise, the bolts may pull out.

However, Marx said he's successfully replaced the head bolts on several 380 and 560 engines without helicoling. "You just have to torque them down very carefully, according to the book," he said. "But maybe I've just been lucky so far," he added.

Given regular service, the rest of the drivetrain, and most of the car for that matter, seems to be nearly as robust as the engine. Our panel of experts report no unusual problems with automatic transmissions (manual gearboxes were never an option on U.S.-spec cars), rear ends, suspension or electrical components. Cunha said front brake rotors might need replacing every 40,000 miles, catalytic converters sometimes plug up after 100,000 miles, and water pumps, fan clutches and starter may fail after 80,000 or 100,000 miles.

The 450SLs were subject to a formal recall, one still being honored by Mercedes-Benz, for cracking subframes. The dealer will replace or weld the subframe.

During the Seventies, German cars were not noted for their effective air conditioners, and these SLs are no exception. Except for the servo units in the automatic climate-control systems of the 1977-1980 450SLs, which seem to fail every three years, the air conditioners don't break particularly often. "They just don't cool well", said Marx.

SLs aren't given to rust. But any prospective buyer of a car that's lived much of its life in an area where salt is used on winter roads should check the steel lid that covers the hardtop, the front fenders, around the headlights, inside the trunk and the rear box section of the chassis.

Paint, chrome and upholstery hold up well. Even the dashboards aren't prone to cracking, except blue ones for some reason. The horsehair seat padding, however, does tend to collapse over time. But replacement pads are available.

Indeed, Hemming Motor News is chock-full of advertisements for Mercedes or SL specialists who can provide almost any body, trim or mechanical item. Mercedes-Benz dealers can also supply most parts for these SLs.

Given the long model run and the various engine changes, there is a pecking order of desirability among the V-8 SLs. For guidance on this aspect of SL buying, we turned to John Olson, of the SL Market letter (2020 S. Girard, Minneapolis, Minn. 55405, $42 for nine issues).

1) Because it represents the pinnacle of the car's development, Olson places the 560SL at the top of his SL list. Of course, as relative youngsters, they also command the highest prices.

2) Next in line come the models that generally cost the least: The earliest V-8 SLs, the 1972-1973 models. Horsepower steadily declined in subsequent years, reaching a low with the 380SL. Moreover, these earliest car don't have catalytic converters to worry about, and they have the esthetic advantage of smaller European bumpers.

Then there's the SLC, the stretched pillarless coup version of the SL. The extra 14 in. of wheelbase allowed for reasonably roomy rear seat. Introduced immediately after the SL, the limited-production SLC became the top of the Mercedes' model line (beside the very limited-production 600). Some called its handling crisper than the SL's, while others appreciated the added carrying capacity. But perhaps because of Ho-hum looks and its fixed top, the SLC never became very popular here.

The model was discontinued after 1981.  Today SLCs can cost 10-20 percent less than the SL and, in this respect, represent quite a bargain.

Any SL shopper is likely to come across gray-market cars as well, cars originally sold in Europe but supposedly brought into compliance with U.S. safety and emissions regulations. In Europe these SLs came with a bewildering array of engines and transmissions. Some, like the powerful 500SL, were very desirable indeed. Olson estimated that during 1985 alone, the peak year for gray-market imports, some 5000 SLs entered the U.S. If you should seriously consider purchasing a gray-market car, check especially carefully for rust, and make certain the proper EPA and DOT releases come with the title.

And are any of these V-8-powered SLs likely to become valuable collectibles? You probably shouldn't plan to retire off the profits from one of these cars. Unlike their predecessors the 300SL or 230/250/280SL, the V-8 cars are just too numerous to become collector pieces any time soon. Instead, these are cars to buy, use and enjoy.

End of Road and Track Article